With great pleasure, I am handing this blog over to Whistlewood volunteers. If you would like to contribute, you can write your own piece as Chris has or send me notes using the contact page or via Whistlewood.

Exciting week this week, the doors were glazed and the lantern arrived on Wednesday I’m now starting t see the finishing line, albeit still quite some distance off.

On Monday myself and Rob finished the 3 sections of decking from the weekend’s laying session, it’s looking really good now.

On Tuesday the guys from Toons came to put the thresholds down and glazed the doors.

On Wednesday the lantern arrived; anyone good at assembling flat-pack?

It was fairly straightforward to assemble the lantern prior to putting it onto the top of the Roundhouse. Sadly, this is where things had to stop, whilst doing a trial fitting of the glass we found that two of the angled rafters were sitting lower than the others. Had I put it together wrongly, were the instructions not right, had it been made that way? After some investigation and long phone calls to the supplier it turns out that they had machined something not quite right! So, it’s on hold whilst they make and ship a new part.

Meanwhile the builders were continuing with the shingle roof.

And inside they were preparing for the plasterer by insulating the roof with sheep’s wool insulation. 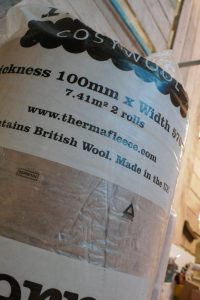 We’re using sheep’s wool insulation as it’s one of the best solutions for both its insulative properties and for maintaining breathability throughout the roof structure. 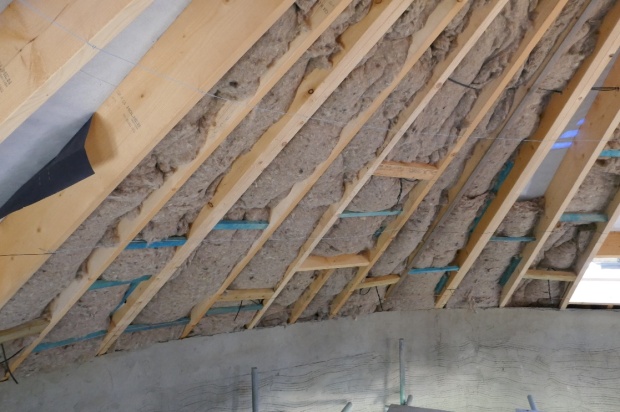 Next week the ceiling will be boarded with plasterboard and skimmed over. However, I won’t be there to see this happen as I’m taking a well-earned break. Therefore, the next diary will be in two weeks’ time where I’ll be catching up with what’s happened on-site during my absence.

This site uses Akismet to reduce spam. Learn how your comment data is processed.