With great pleasure, I am handing this blog over to Whistlewood volunteers. If you would like to contribute, you can write your own piece as Chris has or send me notes using the contact page or via Whistlewood.

This week has been full steam ahead with the deck substructure in preparation for the big deck laying event on Saturday which I’ll be adding into this week’s diary. Part of the preparation was to remove the scaffolding from around the Roundhouse, and it was great to see the building without any obstructions for the first time.

The builders have been getting on with the substructure using treated timbers to withstand the weather and giving a firm base for the decking.

We had a surprise on Monday receiving a phone call to say that the doors will be fitted on Tuesday! So, it was all hands to the pump to clear the access and create walkways for the fitters to work safely from. The doors will be finished and glazed next week. 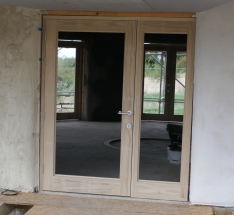 Meanwhile the substructure continued with the guy’s almost completing 5 of the 8 octagonal bays. 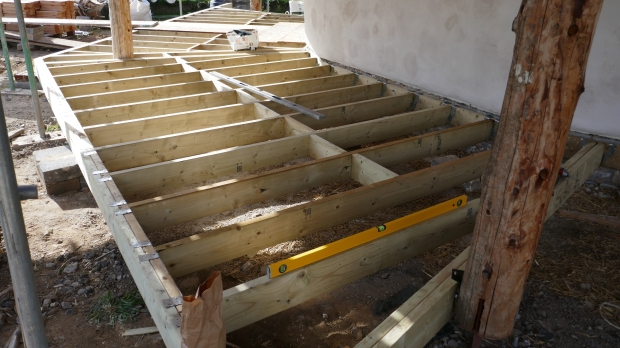 What a wonderful turnout by our volunteers. Working in fairly impromptu teams we managed to get a significant amount of deck laid during the day. The deck boards are locally sourced English Larch a wood that has a natural defence against insect attack and rot and should last, untreated, for many years making the hard work well worth the effort. As Kay, one of the helpers, said just before a well-deserved lunch break ‘doesn’t time fly when you’re laying decking’. 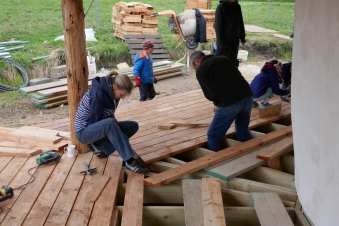 A huge thanks to those who turned up, if you fancy a go at decking come along this week (Monday to Thursday) or for our bi-weekly volunteering session this Saturday the 29th as there’s still lots to do.

This site uses Akismet to reduce spam. Learn how your comment data is processed.